A female in her 60’s, who prefers to remain anonymous, approached me for assistance with surgery. She was scheduled for a vaginal hysterectomy, a surgical procedure to remove the uterus through the vagina. During a vaginal hysterectomy, the surgeon detaches the uterus from the ovaries, fallopian tubes and upper vagina, as well as from the blood vessels and connective tissue that support it. The uterus is then removed through the vagina.

She wanted to use as little sedatives or anesthetics and discussed this with her surgeon who agreed that she could be assisted with hypnosis during the procedure.

The client was referred by one of our recent graduates who felt that she was not ready to support this client.

We had two preparation sessions. During session 1, I ensured that she could achieve the relevant trance depth and once that was co

nfirmed we established that her subconscious mind supported her decision to go through the procedure with as little chemicals as possible. Next we communicated with the parts that were to be removed. Her womb “reported” that it had done its job and would anyway shrivel away and it was very ok to be removed.

During the second session we attained even deeper trance depth and went through the procedure as best as I could have her visualize while she would engage in her favorite visualizations being disassociated from the procedure. We started with the spinal or epidural anesthesia, a medicine that would numb her lower body to block pain. Epidurals are given through shots in or around the spine and can be very painful especially when the client is anxious and tense. Then we visualized just how relaxed she would stay during the surgical procedure and how easy and fast the healing afterwards would be.

On the day of the surgery I met her in the prep ward. She refused any sedative and when she received her epidural the doctor stated that because she was so relaxed it was easy for him to find the correct spot for the injection. I was present and talked the client through the injection, taking her mind off what was happening and she did not react at all when the needle was inserted.

Once I was prepped for theater, I waited by her side continuing visualizations which I knew would have a relaxing and calming effect on her. Once in the theatre I was surprised how welcoming everybody was including the surgeon and anesthetist. I took my place by her head facing away from the screen that was put up so she would not be able to observe the procedure. For 1 1/2 hours I kept talking about her favorite topics and she was responsive most of the time and even smiling through the part when they actually pulled the uterus out.

After the procedure, still in theatre, the anesthetist asked her whether she wanted to be medicated or self-medicate. She insisted on self-medication and he handed her a morphine syringe connected to her blood stream explaining how to use it as severe pain would set in any moment with the effect of the epidural wearing off. Although my client still did not need or wanted any medication the anesthetist told her “not to be silly” and use the morphine which was self-regulating to be used at a maximum of every 7 minutes in order not to overdose. As he explained the usage, my client had to break the seal and was actually angry that in doing so she gave herself a dosage.

This was the only dosage of morphine she administered. I stayed with her in the observation ward after surgery, every now and then using triggers to get her back into deeper states of hypnosis. From the observation station she was soon transferred to her hospital bed where we chatted as if we were visiting over a cup of tea. I left the client once her husband arrived and it was obvious that she had not experienced any pre- or post-surgery trauma.

39 Years after my first of three pregnancies I decided to opt for a hysterectomy. This was in spite of my being a yoga teacher and having tried strengthening the pelvic floor with exercise for years. Unfortunately, I had risk factors which made my task very difficult: a retroverted uterus and 2 forceps deliveries. Knowing what I know today, I should have chosen hypnobirthing as I was nervous about childbirth although in perfect health and excited to be a mother. The presence of women like Annick and Claudia would have balanced out the stress that comes with being in a hospital setting.

After googling ‘prolapse’, I was fascinated by the combination of hypnosis and surgery in Europe. It was stated that the patient healed and recovered more quickly when hypnosis was part of the process. Once again I was nervous to hand myself over to the “medical model” after years of trusting my health to my daughter who is a homoeopath and practices Functional Medicine.

I have three people to thank for helping me make a connection with hypnosis practices. The first is Patrick McDonald, our osteopath, who gave me Annick’s name. I met with her and was impressed with her gentleness and professionalism. Then Annick handed me over to Claudia who had been wanting to make the use of hypnosis during surgery more widely known. Claudia took me on and while preparing me for the experience, fitted me into her busy schedule and between workshops. Annick stayed in contact with me throughout the process and beyond, which buoyed me up beyond belief.

Claudia represents a modality which could revolutionize medicine in South Africa. To their credit, after much communication with my gynecologist and anesthetist, I happily established that they were not opposed to the presence of a hypnotherapist in the theatre. In fact she was received very cordially and treated with respect and fascination. The operation itself was a surreal experience. It started with me being wheeled down the corridor to the theatre with Claudia immediately and intuitively swinging into her sacred role. I started going to a place of inner power. Everyone we met became part of the healing process. Claudia later reminded me that we had attracted amazing people, like the hymn singing porter whose voice soothed me. Before he left to continue his work, he eloquently and passionately spoke about the unity of humankind. During surgery, I visited various uplifting places with Claudia, like India, where we walked around. To a yogi, this was very inspirational and special. The operation was over very soon and the anesthetist was pleased that it had taken less time than expected. And I was awake, conscious and alive though a bit groggy as he insisted on administering some anesthetic beyond the epidural. Claudia may be able to fill in the blanks better than I can. I was surprised at my level of clarity and sense of having an internal locus of control. Claudia stayed with me until my husband arrived.

My pain free experience was in part due to the type of surgical procedure, but my ability to make the procedure totally pain free was my use of hypnosis. It was as if the actual operation was the start of healing. The nurses were amazed that I was up and hungry by lunch time the next day. I refused further drips and had to stand my ground. They sensed that I wanted to do things differently. Some felt threatened but others understood and that was my legacy to them, assisted by Claudia. After a second night, I decided that I needed to go home. My two daughters arrived to look after me, but were amazed when I suggested we drive into the winelands for lunch. The rest of the week passed in the same vein.

I also have to thank my gynecologist, Dr Dehaeck, for her expertise and acceptance of my request to have a hypnotherapist in the theatre. My dear husband visited me three times a day and bought freshly squeezed juice and flowers from our garden.

Trained in variety of transformative methods Claudia Klein combines her knowledge to assist people to overcome most challenges in order to create inner peace and a true sense of worthiness to achieve their desires. She is an expert Hypnosis Practitioner/Trainer, a certified HEAL YOUR LIFE teacher and certified Laughter Yoga Leader. She is the director and principal instructor at the South African Institute of Hypnotism (SAIH) and the Mastermind Training Centres in Cape Town and Johannesburg (accredited by the International Medical and Dental Hypnotherapy Association (USA) and the UK-based APHP (The Association for Professional Hypnosis and Psychotherapy) as well as the GHSC (General Hypnotherapy Standards Council)

by Claudia Klein CHT(nm) SAIH, CPTT, CPTF, NLP and HNLP Everyone experiences pain at one point or another. It’s often an indication that something is wrong. Each individual is the best judge of his or Read more…

You and Your Ego

Most people condemn the ego. It’s often considered as something that must be be suppressed or subdued. Gaining an understanding of what the ego is and how we can use it in a positive way Read more… 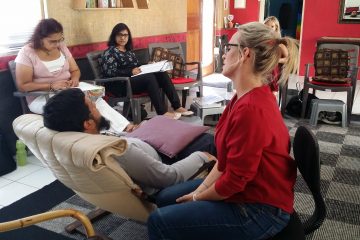 People Learn Hypnosis for Different Reasons! I learned Hypnosis about 35 years ago from my obstetrician which helped tremendously to make the birthing experiences fast and easy. Since then I have spent thousands of hours Read more…